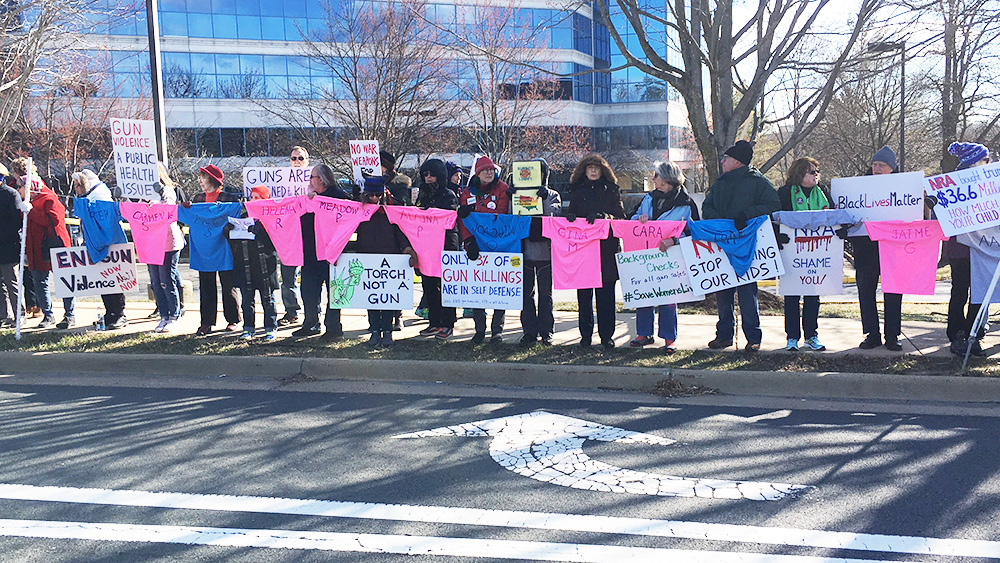 By Kathi Levin and Maggie Godbold:

It was the 14 th of the month, and, just as every month on that date, protesters had gathered outside the National Rifle Association headquarters in Fairfax to wave signs, encourage drivers to honk in support and, occasionally, listen to speeches. But this time it felt different.

The protesters included quite a few “regulars”, mostly retired folks, but this time the number of young people, high school and college age, was larger than usual. Yet school wasn’t out on this Wednesday at 10 am.

It was the T-shirts that gave it away. As always, there were blue and pink T-shirts, each of which had the name of a child killed by gunfire. Usually, the T-shirts were small, for the vigils had started in the memory of the children killed at Sandy Hook Elementary School five years earlier.

But at this vigil, on March 14, the T-shirts were adult-sized. Because this vigil was the first after the slaughter at Marjory Stoneman Douglas High School in Parkland, FL –one month to the day that 17 students and faculty were slain.

Ten days later, an estimated 200,000 people, including many young people from all over the country, would gather just a few miles away in Washington D.C.  in the March for Our Lives. They would lift their voices and link their arms to show that Parkland was not just another school shooting, but the moment at which schoolagers would begin to change history.

However, that thought must have been far from the mind of anyone gazing from inside the mirrored walls of the NRA building at the small, almost symbolic, event unfolding below.

But while life in the building of death went on as usual, the band of protesters gathered on the sidewalk on that cold and windy Wednesday knew otherwise – change was finally on its way.

Vigils at the NRA to protest gun violence began after the Dec. 14, 2012, Sandy Hook shooting. They occur every month on the 14 th , at 10:00 AM if it’s a weekdayor Saturday, at 2:00 PM if it’s a Sunday. The group Concerned Citizens Against Gun Violence maintains a Facebook page with more information:

Photo: Protesters holding up T-shirts at the NRA headquarters in Fairfax. / Photo by Samuel Walker