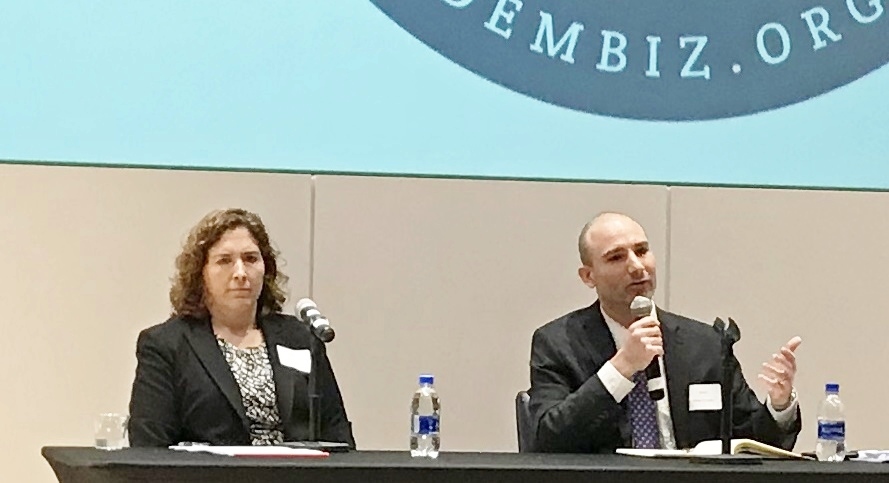 Democratic Party candidates for criminal prosecutor clashed in a debate Friday, May 24, as challenger Steve Descano painted a vision of “progressive justice” while incumbent Ray Morrogh, represented by a staff attorney, insisted on the importance of deciding each case on its individual merits.

Morrogh, who was ill and sent Katherine Stott from his office as a stand-in, has been a prosecutor in Fairfax County for 35 years and has been the county’s elected Commonwealth Attorney (CA) since 2007. In this position, he manages an office of 34 attorneys who handle criminal prosecution for the state.

Descano is a former federal prosecutor and is new to Fairfax County elective politics, although he has served on the  Fairfax County Police Civilian Review Panel, tasked with conducting civilian oversight of the county police department.

The candidates will face off in a primary on June 11.

The debate was held at Valo Park Auditorium in Tysons and moderated by Julie Carey, a News4  television reporter.

On issue after issue — cash bail, marijuana possession arrests, immigrant defendants, death penalty — Descano promoted policy changes that “reflect our values” and would end the current “two-tiered justice system.”   He referred to his comprehensive, 20-page plan to “lead with values” in administering justice (available on his website).

By contrast, Stott, who has served in the CA office since 2003, recalled that Morrogh told her years ago to abide by a simple dictum:  “A prosecutor does justice.”  Whether the decision is to decline the charge, to lessen it, or to pursue it vigorously, she explained, it must be made on the unique facts of the case at hand.

Cash bail, said Descano, “punishes people for being poor.” Defendants who cannot post bail often lose their jobs and their families suffer. Under his leadership, prosecutors would not ask for cash bail for defendants who did not pose a flight risk.

Stott, however, pushed back, saying that bail decisions are not under the authority of the prosecutor. Descano’s view “shows unfamiliarity with the judicial system,” she asserted.

Descano would decline to prosecute for possession of small amounts of marijuana, saying the implementation of the law leads to racial  bias. African-Americans are 9% of the county’s population, but account for 40% of marijuana arrests, he said, although there is no evidence that they consume marijuana at higher rates than others.

For Stott, such a policy would be prosecutorial negligence. “Prosecutors are supposed to uphold the law,” she reminded Descano. She prefers letting the CA make decisions on marijuana arrests on a case by case basis.

Undocumented immigrants also are subjected to “unequal treatment under law,” Descano said, as the consequences of conviction can be catastrophic — “families ripped apart” — even for minor offenses. But for Stott, “prosecutorial discretion” is paramount in such cases. The immigrant defendant’s risk of deportation must be balanced against public safety concerns, she said.

Stott said that Morrogh is “personally and religiously opposed” to the death penalty, and at times refrains from charging defendants with “capital murder ” — punishable by death — in favor of a lesser charge. However, she termed execution an “unfortunate necessity.”

But Descano was categorical on this issue. “I would not bring the death penalty. Period. Full stop.” He said the death penalty “does not keep people safe” and is racially discriminatory. “That’s not justice,” he said.

Moderator Carey asked Stott why Morrogh opposed then-Gov. Terry McAuliffe’s plan to restore voting rights to felons in 2016. Stott said the action posed a threat to public safety as the rights restored included the right to petition the court to possess a gun.

Descano countered that McAuliffe had an F-rating from the NRA and would not promote broader gun ownership for any segment of the population. The re-enfranchisement program had no connection to gun rights, he said. On the contrary, stripping felons of their right to vote was “a vestige of Jim Crow” and was long overdue for reform, he said.

In the event, McAuliffe was successful in restoring voting rights to over 156,000 citizens despite an appeal to the state Supreme Court by Morrogh and several other county CAs.