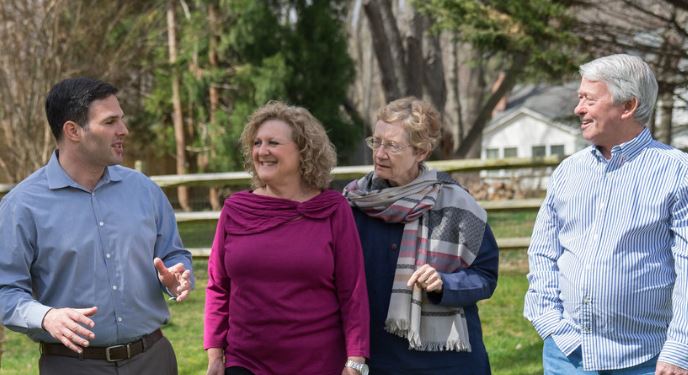 Like many readers of The New York Times, both here in northern Virginia and across the nation, Dan Helmer was taken aback by the indifference to gun violence shown by an incumbent Virginia state delegate,  especially in the wake of last week’s dual mass shootings in El Paso and Dayton.

The only difference is that Helmer, a Democrat, is running to replace the delegate in question, Republican Tim Hugo, in Virginia’s 40th district.

In an article which appeared on the front page of the Times on Aug. 9 (link here), Hugo is reported to state that gun violence is of comparatively little concern to voters, and that he is not hearing voters plead with him to do something about mass shootings.

Helmer’s reaction, in an interview with The Blue View, was scathing. “I was surprised that my opponent was not out there listening to the community as I have been,” said Helmer.  He cited mass shooting incidents in the Commonwealth to make the point. “Here in Virginia, Virginia Tech was enough for us, Virginia Beach was enough for us. More people die from gun violence than traffic accidents. The only person who it hasn’t been enough for is our current delegate.”

“Voters who voted for Donald Trump, who voted for Hillary Clinton, are ready to vote for common sense gun laws and our current delegate hasn’t heard this,” said Helmer, who carried a weapon as an Army officer in Afghanistan and Iraq before leaving the military and starting work as a business strategist.

”Maybe it’s hard to hear when you’re taking tens of thousands of dollars from the gun lobby.”

The Times article was unusual in highlighting a local northern Virginia race for its nationwide audience. The article noted that Virginia’s elections in November for all 100 delegates and 40 senators will be a major test of the potency of gun violence to sway elections.

The issue is particularly sensitive here in Virginia as Republicans only hold one-vote majorities in both legislative chambers. And Hugo managed to win his ninth term as delegate in 2017 by only 99 votes. Hugo’s district is a priority in the Democrats’ plan to turn the general assembly blue.

While Helmer counts on gun violence to mobilize support, he is not a one-issue candidate. “This campaign is about restoring public service that is going to fight for our values,” he said, citing affordable health care, women’s reproductive rights and payday lending as other key campaign topics.

Although Helmer appreciates the Times’ spotlight on the stark difference between him and Hugo on the key issue of gun violence, “No article in the New York Times or Washington Post is going to determine the outcome of the race,” he said.  Helmer spent the weekend, as usual, knocking on doors in the 40th district to ensure that his message of common sense gun laws gets delivered personally, household to household.