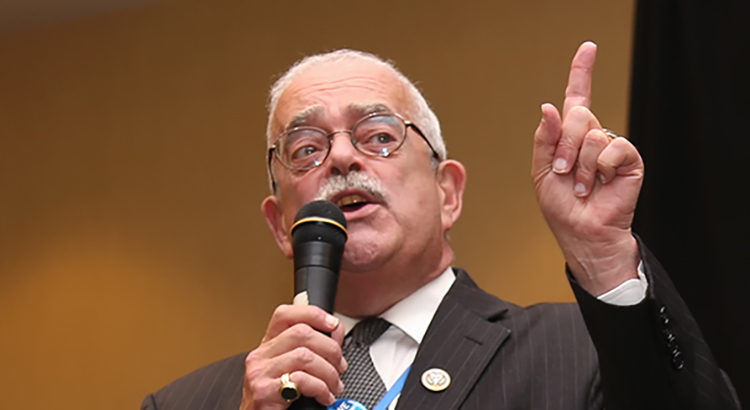 “I believe we’re on a trajectory for a big win in November because Trump has shown himself to be an incompetent fool and a narcissistic figure,” U.S. Rep. Gerry Connolly (D-11) said Wednesday during an online Hunter Mill District Democratic Committee meeting.

Connolly said we will have a chance to rebuild America in a more progressive way with even traditionally red states such as Arizona, Ohio, Georgia, and Texas in play.

He said that we are living in an unbelievable time — in a pandemic, an economic slowdown and with systemic racism.

“The horrible death of George Floyd at the knee of a police officer has provoked something — a huge outpouring of outrage, and it’s multiracial,” he said. “It is a moment to reflect on racism in society and how we tolerate police brutality in the name of keeping the peace.”

Connolly recalled witnessing police brutality in the streets of Chicago during 1968 protests and how courts sided with the police. “I never thought 50 years later we’d be talking about the same thing,” he said, adding that Congress has introduced legislation for police reform in America.

He also said that the Heroes Act, a $3 trillion coronavirus stimulus bill which the House passed in May, needs to pass in the Senate. “Republicans’ stated priority is to protect corporations from liability during the pandemic. We need to fight to get that bill passed, which would provide $1 trillion to help plug holes in state and local government finances.”

Another big fight ahead is encouraging everyone to vote by mail. He said the Heroes Act provides $3.55 billion to transition to voting by mail across the country and encouraged 11th District voters to get their ballot applications before the deadline of June 16. He is running against Zainab Mohsini in the June 23 Primary. Voters can apply for an absentee ballot application form here. The absentee ballot return deadline is June 23.

Connolly said the virus (covid-19) is real and that he lost a good friend to it and two people on his staff have tested positive for it. He encouraged everyone to stay safe.

Va. Sen. Janet Howell, another guest speaker at the Hunter Mill meeting, (D-32), said she is in deep mourning over what happened to George Floyd. She hopes that the Virginia legislative special session in August can be expanded to include social-justice measures.

Howell, who chairs the Senate Finance and Appropriations Committee, said that legislation she had been working on for a decade or more finally passed, including no-excuse absentee voting, one-gun-a-month limit, universal background checks, restructuring early childhood programs and making Virginia carbon neutral.

Howell said that funding for several programs that had passed — including pay increases for Northern Virginia teachers, adult dental coverage under Medicaid, and new mental-illness programs — had to be withdrawn because the budget was hit hard by the coronavirus. She said the measures are still on the books but are not funded.