The presidential campaign is in full swing and you are wondering how to make a dent in Trump’s most loyal supporters, Evangelical Christians.  If you want ideas read “The Spiritual Danger of Donald Trump, 30 Evangelical Christians on Justice, Truth, and Moral Integrity,” edited by Ronald J. Sider from Wipf and Stock Publishers.

Ronald J. Sider, PhD., is Distinguished Professor emeritus of Theology, Holistic Ministry and Public Policy at Palmer Theological Seminary at Eastern University and President Emeritus of Evangelicals for Social Action. He has published over 40 books, including “Rich Christians in an age of Hunger” (6th ed, 2015), which Christianity Today recognized as one of the 100 most influential religious books of the 20th Century.

The book is a collection of 25 essays by experts in the field of Theology and other disciplines which focus on the pitfalls of Christian, and in particular Evangelical Christian support for Donald Trump’s presidency. The book is broken into three parts and includes essays such as: 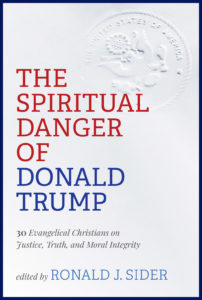 Part I: On Trump

Part III: On Theological, Historical, and Constitutional Issues Regarding Trump

Having been educated in Catholic schools during my formative years, which included religion classes and church attendance, I have never understood why Evangelical Christians have been Trump’s most loyal supporters. According to the book, Christian supporters are motivated by fear of losing the “Culture War,” their dislike of Liberalism and feeling that their views are not respected.

The theme of the book is that although Christians have legitimate concerns about moral issues, it damages the credibility of Christians when they continually make excuses for Trump’s un-Christian behavior. The book frequently cites scripture to illustrate these contradictions.

For instance (Proverbs 6:16-19): “There are six things the Lord hates, seven that are detestable to him: haughty eyes, a lying tongue, hands that shed innocent blood, a heart that devises wicked schemes, feet that are quick to rush into evil, a false witness who pours out lies, and a person who stirs up conflict in the community.” Considering Trump’s constant lying, this citation clearly applies to him and people in his administration.

The essay by Randall Balmer, sums it up pretty well in this quote “After a long and lingering illness, evangelicalism died on November 8, 2016. On that day, 81 percent of white American evangelicals who for decades claimed to be concerned about “family values” registered their votes for a twice-divorced, thrice-married, self-confessed sexual predator whose understanding of faith is so truncated that he can’t even fake religious literacy.”

Balmer’s essay is fascinating reading for someone who does not know the history of the evangelical movement. The current view is that evangelicals are a conservative force in American politics, but that is a modern development.

In the past, evangelicals were an engine of progressive reforms such as public education, prison reform, assisting the poor and women’s rights. Northern evangelicals worked during antebellum times to abolish the institution of slavery.

Another misconception is that evangelicals were driven into politics in the 70’s due to the abortion issue. The essay debunks this myth as evangelicals saw abortion as a “Catholic issue” at that time, and the Southern Baptist Convention favored abortion’s legalization.   Even more revealing is that evangelical leaders supported Roe v. Wade in 1973!

In fact, what we now know as the Religious Right was formed to defend tax exemptions for racially segregated schools such as Bob Jones University and another school started by the infamous Jerry Falwell.  Falwell later made an issue of abortion, and gay rights.

For further clarification I spoke with Dr. Ronald J. Sider about the book.

MOTTA:   Evangelical Christians have been Donald Trump’s most loyal supporters. How can they back a President with so many moral failings?

SIDER:  One of the greatest failures of white evangelicals in my lifetime is their support of Trump. There are several reasons for this, abortion, religious freedom, and that lower-class whites have been getting screwed for the last 30 years. Some of it is racism. It is also because some white evangelicals do not prioritize economic justice, care for creation, a biblical concern for the sojourner, that is the immigrant, etc.

MOTTA: You say in the book that Christians, especially evangelical Christians, are turning away from their faith due to what they consider immoral, fundamentally wrong political engagement by Christians. Are they leaving Christianity completely? Is it just about politics?

SIDER:  White evangelicals are leaving and going to other churches and some are leaving the Christian faith entirely. They are concerned about the inconsistency in backing Trump for the last four years. Character mattered when Bill Clinton was president but not now.

MOTTA: It seems that evangelicals have championed issues in the past that are dear to Democrats such as women’s rights, fighting poverty, public education, and even abortion rights. How can Democrats engage with evangelicals to promote progressive policies?

Evangelicals are somewhat conservative on women’s issues, but the feminist movement began with evangelicals in the nineteenth century. Biblical feminism is growing among evangelicals.

MOTTA: How can Democrats deal with wedge issues like abortion and gay rights when attempting to garner evangelical support?

SIDER: I am in favor of federal protection of civil rights for LGBTQ Americans, but the same legislation should protect the religious freedom of religious organizations that have a traditional view of marriages. In Massachusetts, Catholic Charities lost its license to arrange adoptions because they would not facilitate adoptions by gay couples even though there were other organizations in the state that would do so. Democrats should make space in their party for people who want some restrictions on abortion.

SIDER: The National Association of Evangelicals is working on immigration issues, economic justice and anti-racism.

MOTTA: Are white evangelicals moving away from Trump and Republicans this election cycle?

SIDER: We will know better on November 3.