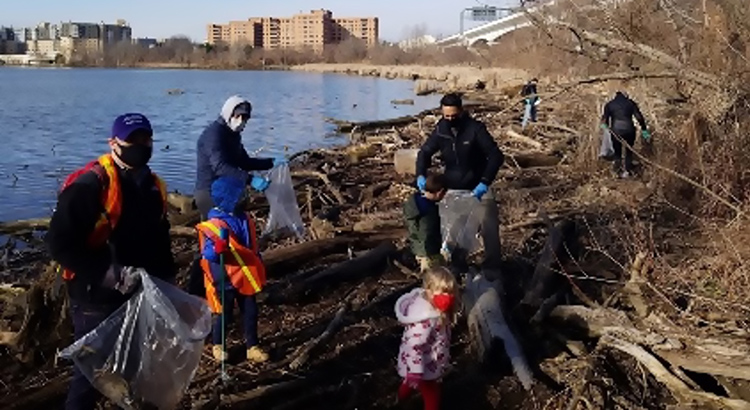 By Mary Alexander and Nancy Hall:

It was cold and overcast this past Martin Luther King Day morning, but that didn’t stop Fairfax County Democrats from coming together (safely distancing themselves) to clean up Jones Point Park at the southeastern tip of old town Alexandria. The Biden Inaugural Committee challenged Virginians to participate in a Day of Service on that day, January 18, to donate their time helping their community on that special day. And so, in Northern Virginia — Fairfax County, Arlington County, Alexandria and Falls Church — families responded to the challenge.

Heeding the call to volunteer, over 120 hearty souls, plus children and dogs, joined the community of helpers looking to make the park, along the Potomac River and situated beneath the Woodrow Wilson Bridge, trash free. They also combed the riverbank of items that do not decompose and thus pollute the water — a source of drinking water for the Washington area.

The National Park Service opened Jones Point Park in 2008 as part of the George Washington Memorial Parkway after completing the renovation of the Woodrow Wilson Bridge. But the history of the land is much older, being part of the first land grant in Alexandria, and to the first woman grantee, Margaret Brent, in 1654. It also is part of the original boundary for Washington, D.C. For many years it was a critical piece of the city of Alexandria’s history as one of the largest centers for shipping, manufacturing, and transportation in the nation.

However, because it’s directly below the twelve lanes of the Woodrow Wilson Bridge, and the water of the Potomac River along the park’s shores is tidal, trash continually gathers in the park. It continually needs to be maintained, so periodic cleanups are vital and necessary. Unfortunately, due to COVID-19, the National Park Service, the Potomac Conservancy and other environmental organizations have not been able to stay current in cleanup efforts. So, the National Park Service was thrilled when it was approached regarding an MLK Day cleanup event.

The Fairfax County Democratic Committee (FCDC), and Democrats in Arlington, Alexandria and Falls Church all joined together to sponsor the event and recruit participants. And the GW Memorial Parkway, part of the National Park Service, gladly provided supplies, bags, trash pickers, vests, hand sanitizer, organization and the support needed for a successful event.

To contribute an educational element to the day, FCDC member Nancy Hall designed two posterboards describing how long it takes for common household items to decompose. Did you know that glass and Styrofoam pellets do not disintegrate, and can last over one million years? Plastic bottles take over 450 years to decompose and plastic bags, up to 1000 years. Aluminum cans can take over 200 years, and even cigarette butts take 10 years to decompose.

Volunteers came in all sizes. There was the two-year-old dragging his bag of trash and the two hearty “seasoned” vols taking breaks from bending over. Even politicians joined the fray. U.S. Rep. Don Beyer and Megan Beyer participated in the morning filling their own bag full of trash.  Mason District Supervisor Penny Gross also made an appearance, noting how many vest-wearing volunteers were spread out over the park. And its 40-acre size made the park ideal for spreading about.

Many participated in a scavenger hunt finding many of 40 common household items and being reminded of the time it takes an item to decompose. A prize was awarded for the most trash found, 200 hundred plastic bottle caps. It was hard to determine the largest item, ranging from a trampoline, a wheelbarrow, a bathtub, an air conditioner a traffic cone, and the base of a gas grill, although the trampoline seemed the winner.

But the winner of the most unusual find was the hardest to determine. Items collected included a hockey puck, a Christmas ornament, a fireplace sconce bulb, a tennis ball, an Easter egg, an innertube, a pair of wool socks, a bunny button and a paint brush, but a war shipbuilding sign, seemed to be the most unusual.

After the two-hour collection period, the National Park Service carted off 133 bags of trash plus a variety of other items. And the best result of the day, besides the pristine look of the park, was the 100% positive rating by those community members who came out for this gratifying, fun-filled MLK Day of Service event. With the enthusiasm and support from the National Park Service, perhaps FCDC can organize a second annual MLK Day of Service event next January.

Thank you to all the organizers and to all the participants for making the morning something special.

MAIN PHOTO: These are among the more than 120 hearty souls, plus children and dogs, who joined the effort to clean up Jones Point Park. / Photo by FCDC Executive Director Jack Kiraly.

Mary Alexander and Nancy Hall were the coordinators of the Northern Virginia MLK Day River Clean-Up.