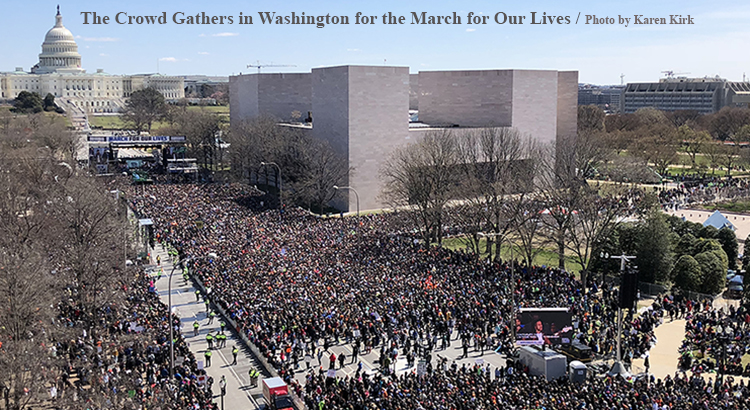 Hundreds of thousands of people showed up for the March for Our Lives on March 24 in
Washington, D.C. Led by students from Marjory Stoneman Douglas School in Parkland, FL.,

they carried creatively crafted signs supporting gun control measures, including banning assault weapons. The fervor of the teenage survivors of the school shooting on Valentine’s Day has given new energy to the push to stop gun violence in America. But only about 10% of the crowd was made up of teens, according to Dana R. Fisher, a professor of sociology at the University of Maryland, whose article appeared in The Washington Post. During the march, Fisher’s research team sampled 256 people who were randomly selected. They found that 70 percent of the crowd was made up of women, the average age of adults in the crowd was just under 49 years old, and participants were highly educated with 72 percent having a BA degree or higher. They also found that about 27 percent of participants at the March for Our Lives had never protested before. See more on the march here.

2 thoughts on “March for Our Lives: Photo essay”